The title is just a joke. Since it seems that the two most popular English words in Taiwanese media seem to be "touch" and "high", I thought I'd take them to the extreme of envisioning a groping, drugged up Taiwanese person! Again, just a joke.

"Touch" is used again and again in all sorts of adds and campaigns and songs. For example, the Cartoon Network is promoting a new cartoon (some soft of Powerpuff Girls take-off) with a song in which the repeated English words are "touch" and "high". Here it is for your viewing and listening pleasure. In terms of touch, HTC has its popular iPhone-like touch handset,the Touch. Another salient example is Taiwan's tourism campaign, Taiwan: Touch Your Heart. OK, these are just three examples of the over-use of the word "touch" in Formosa.

Now that I have burned the image of a groping hand all over Taiwan, let's move onto the word "high". In English, using "high" as an adjective is often used in conjunction with the taking of illicit drugs and the resultant high one feels. However, in Taiwan, "high" is used to mean generally exuberant and happy. Often, you will hear phrases such as "這裡非常熱鬧,大家都很HIGH ("This place is hopping! Everyone is high!"). Or "台北最High跨年晚會" ("The Best / Highest New Years Party in Taipei!"). A final example is description of a Coco Lee concert as the "most high" (最High).

So, if you are coming to Taiwan, be prepared to get "high" and do a lot of "touching"! Or at least understand how these English words have been incorporated into Taiwanese Mandarin.
Posted by Boyd Jones at 8:09 PM 1 comment:

Video the vote in Taiwan!

There is an effort to duplicate the CNN-Youtube partnership that brought questions from netizens to the American primary election presidential candidates. The site Peopo.com is spearheading the effort in partnership with other media entities. More information here.

Having felt the nascent power of and feeling of community from foreign bloggers in Taiwan through the recent get-together in Hsinchuang (and through on-going and growing contact online), I now feel strongly that foreigners should try to participate more fully in society and communities here. We should have a voice.

As such, I encourage you to consider recording a video question for DDP candidate, Frank Hsieh (謝長廷) and his Chinese Nationalist Party (KMT) rival Ma Ying-jeou (馬英九). If you need help with the Chinese on the site, I can help you.
Posted by Boyd Jones at 7:01 PM 4 comments:

Andres maintains a great blog covering the various and sundry universe of English-language blogs about Taiwan. Here. A good compendium of the Taiwan blogosphere as it were.
Posted by Boyd Jones at 4:40 PM 1 comment:

Happy Chinese / Lunar New Year of the Mouse /Rat! (Mouse and rat are referred to using the same word in Mandarin Chinese). 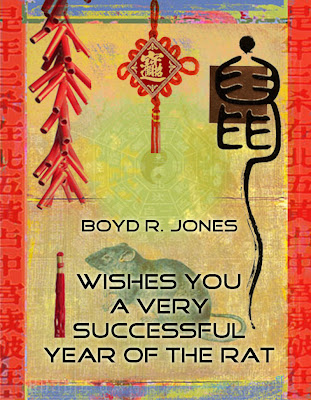 Posted by Boyd Jones at 7:09 PM No comments: